UHD offers ultra-realistic detail, the ability to display more information on one screen, and four times the detail clarity, which is most evident when displaying text. For commercial applications, essential features, such as portrait mode and longer operational hours, are now combined with UHD clarity for the ultimate commercial display. 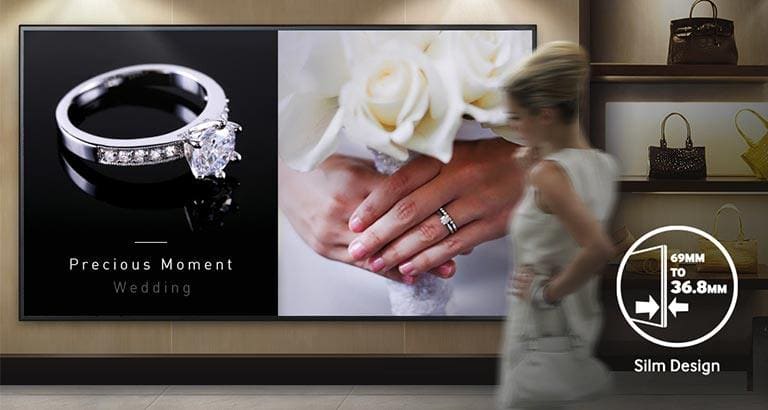 2016 New UHD Display QMF which designed for a commercial environment

Available in configurations spanning 48” to 98”, the UHD line-up is designed to deliver superior image quality in all environments. The versatile range of displays is specially configured to suit any business application. The UHD displays deliver a super-crisp image with high pixel density that is perfect for displaying even the smallest details of photos and videos in a hyper-realistic and immersive visual experience. The UHD line-up offers 24/7 availability as standard and high durability built in. Non-glare panels come as standard to ensure outstanding performance in bright conditions. Boasting a narrow-bezel configuration, the standalone displays offer a compact solution to environments limited by space or lighting. The unique bezel design helps drive clear, uninterrupted viewing.

QMF Series delivers four times the FHD resolution on the same screen area, resulting in the most accurate recreation of details possible. Text that displays on QMF Series in UHD is super-crisp due to its high pixel density. High-detail visuals, such as photos and videos, are visible with the smallest details for a hyper-realistic and immersive visual experience.
In addition, customers can replace older video walls composed of smaller FHD displays with a single large QMF Series display to eliminate the bezels and produce a seamless view of the content. The resolution made up of the four FHD displays is singlehandedly covered by one UHD display.

Now, you can provide more information through a smaller number of displays. UHD offers four times the resolution of FHD, which means that you can display the equivalent of four FHD content screens on a single UHD screen. QMF Series features a wide array of connectivity options, including the ability to display content from four separate input devices on the same screen without the need to first merge the content on a separate PC. With QMF Series, no special third-party components are required.
Various PIP and split-screen scenarios are possible, far beyond just four equally separated rectangles. This flexibility enables dynamic and efficient usage scenarios, such as the display of a video conferencing system on a large part of the screen, along with reference documents from a different device on another screen area for meeting attendees, or a product image display next to a specifications list in a retail store. 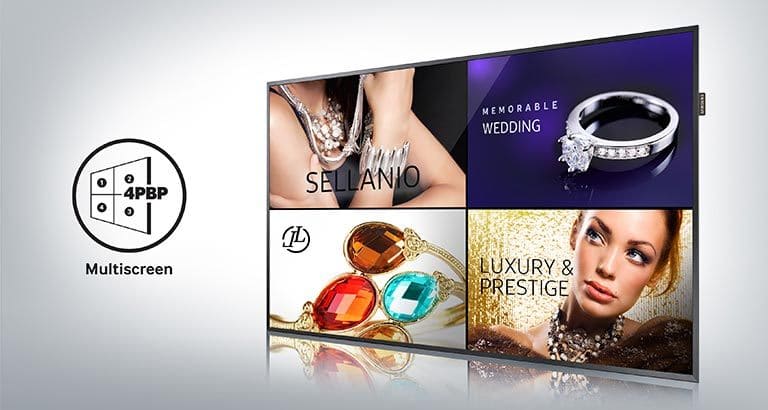 To meet the demands of traditional commercial environments, digital signage is often installed in portrait mode. Thus, it is critical that the digital signage supports portrait installation to fit to the aesthetics of the setting while still delivering the dynamic qualities of digital signage. QMF Series offers pivot mode that allows them to be installed in either landscape or portrait orientation to suit the environment’s needs. 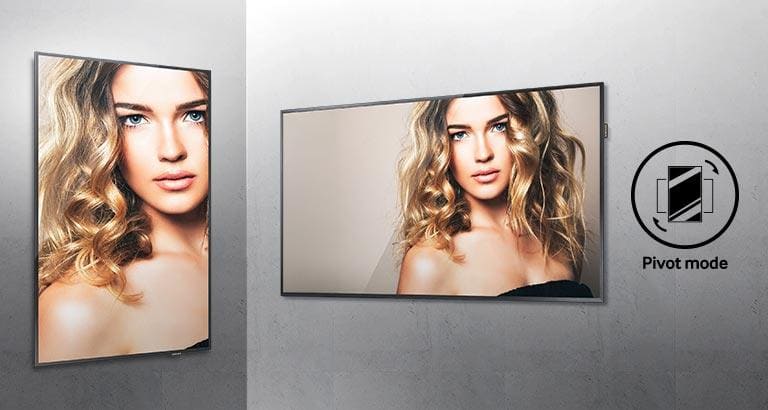 Due to the relative novelty of UHD in commercial display settings, few media players currently offer support for UHD streaming. To meet this demand, Samsung launched an optional UHD-capable SBB, which can attach to the back of the QMF Series. The simple installation of this SBB eliminates unnecessary wire clutter and also removes the need to create separate housing for the media player.
QMF Series natively supports a high 60 Hz refresh rate that ensures seamless video playback and eliminates the choppy visual experience often observed at a lower refresh rate. The QMF Series supports DP 1.2 connectivity, which is capable of streaming UHD video content at a refresh rate of 60 Hz, delivering a true UHD experience. 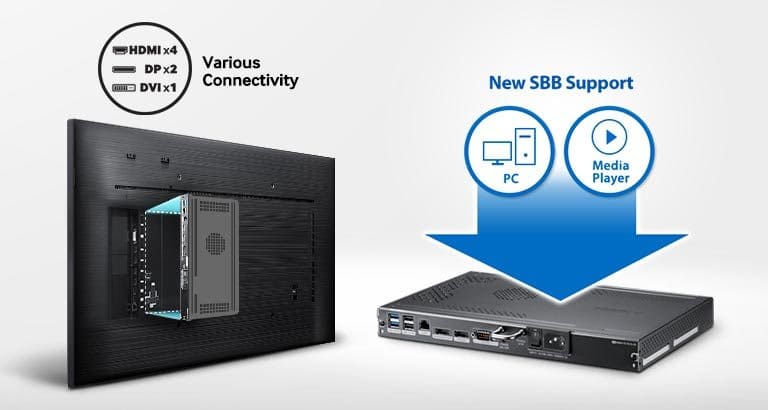 There are no reviews yet.

Be the first to review “SAMSUNG QM75F 75″ DIGITAL SIGNAGE DISPLAY” Cancel reply
Your custom content goes here. You can add the content for individual product
Back to Top